Welcome to the Future of Agriculture and learn how biotechnology and agriculture are helping to shape the way for a sustainable future. 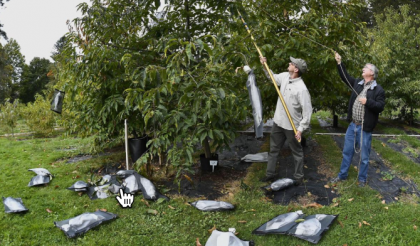 SYRACUSE, N.Y. (AP) — Chestnuts harvested from high branches on a chilly fall morning look typical: they’re marble sized, russet colored and nestled in prickly burs. But many are like no other nuts in nature.

In a feat of genetic engineering, about half the chestnuts collected at this college experiment station feature a gene that provides resistance to blight that virtually wiped out the American chestnut tree generations ago.

Researchers at New York state’s College of Environmental Science and Forestry will soon seek federal clearance to distribute thousands of modified trees as part of a restoration effort — a closely-watched move that could expand the frontier for genetically engineered plants beyond farms and into forests. The precedent-setting case adds urgency to a question scientists have already been grappling with:

Should genetic engineering be used in the wild to help save or restore trees?

Opponents warn of starting “a massive and irreversible experiment” in a highly complex ecosystem. Proponents see a technology already ubiquitous in the supermarket that could help save forests besieged by invasive pests.

“We have this technology, it’s a very powerful technology, and we can use that now to save a species,” said Professor William Powell, a molecular plant biologist who directs the American Chestnut Research and Restoration Project at the college.

The researchers will ask the U.S. Department of Agriculture to assess an American chestnut tree with a gene from wheat that helps it tolerate cryphonectria parasitica, a fungus unwittingly imported to the United States over 100 years ago.

The blight decimated a towering tree species once dominant in forests from Maine to Georgia. Nuts from up to 4 billion trees fattened hogs, and its sturdy wood was used to build cabins. Yet by the time Nat King Cole crooned about “chestnuts roasting on an open fire” after World War II, trees were doomed by the blight. Surviving trees today are typically shrubs sprouting from old roots, yet to be infected.

Long-running efforts to breed American chestnut trees with the blight tolerance of Chinese chestnut trees are more complicated than once appreciated. That’s because the Chinese tree’s tolerance comes from a suite of genes, instead of one or two.

Powell and his research partner Charles Maynard began working on a complementary track decades ago at the request of the New York chapter of the American Chestnut Foundation. The added wheat gene enables trees to produce an enzyme that breaks down harmful acid released by the fungus.

Right now, the trees are tightly regulated. Modified trees grow behind the fence of the college’s experiment station near trees without the added gene. Researchers breed the two types of trees for genetic diversity. But flowering branch tips are covered with bags that keep pollen from blowing away. Chestnuts grow and are harvested in the same bags.

About half the chestnuts will inherit the gene, the researchers say.

The researchers will ask the USDA’s Animal and Plant Health Inspection Service to evaluate the risks of the modified tree. They want the agency to lift the regulations it now imposes.

“What we have to make clear is that it’s not going to be any different than the trees produced through conventional means,” Powell said.

But engineered trees are not intentionally planted in the forests for conservation. That could change as genetic manipulation becomes more common and trees are increasingly threatened by climate change and invasive pests.

“If the chestnut is approved … I think it’s accurate to say that it does help pave the way for other biotech trees,” said Jason Delborne, an associate professor of science, policy and society at North Carolina State University. Delborne served on a National Academies of Science, Engineering and Medicine committee that this year released a report that said biotechnology has a potential to help protect forests but recommended more study and investment.

Some scientists are concerned about the long-term effects of a re-introducing a tree into the woods that can live for more than 200 years. How will the new trees interact with the species that replaced the long-gone chestnuts? What if the trees die off again in 50 years?

Forest eco-systems are incredibly complex and the current regulatory framework is not up to the task of evaluating the environmental and societal risks, said biotechnology and sustainable agriculture expert Doug Gurian-Sherman.

“I think we have to step back and ask whether our ability to manipulate things is getting ahead of our ability to understand their impacts,” said Gurian-Sherman, a former senior scientist for the Union of Concerned Scientists.

Rachel Smolker, a co-director of the advocacy group Biofuelwatch and co-author of a report critical of the tree’s release, is concerned that the chestnut tree — with its cozy public image — could be a “Trojan horse” for other trees engineered for commercial use instead of conservation.

Many scientists see biotech as a promising tool left on the shelf, partly due to opposition they say is grounded more in emotion than science.

Meanwhile, trees are dying from scourges such as the emerald ash borer and the spotted lantern fly, and some scientists say biotech could help where other efforts have failed.

“Compared to what’s happening in the world with pests and climate change, I think the risks of making a mistake due to tweaking a gene wrong are so small compared to the risks of doing nothing,” said Steven Strauss, a forest biotechnologist at Oregon State University in Corvallis. Strauss is prominent in efforts to overturn biotech tree bans on certified commercial forest land.

If the application clears the USDA, the tree still needs to be considered by the Food and Drug Administration and it may need to be reviewed by the Environmental Protection Agency. Powell believes the review could take two to four years.

A green light from the government would clear the way for distribution of the genetically engineered seedlings, pollen, or scions for grafting to volunteers around the chestnut’s traditional range.

Nichols, president of the New York chapter of the American Chestnut Foundation, has about 100 chestnut trees on a rise by his house. Thanks to his diligent care, some lived long enough to produce chestnuts this year. Other trees are dying while others sprout anew — a steady cycle of life, blight and renewal in a rural orchard.

The 69-year-old -retiree looks forward to the day he can graft the genetically engineered tree onto his stock, letting the pollen drift in the wind and bringing back a healthy tree his parents talked fondly about.

“If we can do it, we should do it,” Nichols said as he surveyed his trees. “We owe it to the forest to try to correct some of the damage that we’ve done.” 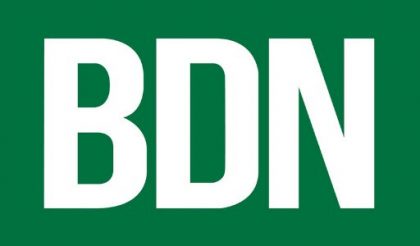 Many of the stressors plaguing these different fields of work are the same — bacteria, insects, fungi, viruses, etc. And they all have an equivalent objective: effective human, plant and animal health management.

To achieve that, each relies on a known set of approaches: identify the problem, quarantine the impacted areas so that the disease doesn’t spread, and implement evidenced-based strategies to ensure a healthy result. In farming and land management, that includes techniques such as crop rotation, use of more tolerant varieties of plants, targeted soil nutrition and manipulation of harvest dates to avoid blight or insect infestations.

It’s only when other approaches don’t provide adequate control that other scientifically-proven interventions are brought into the picture such as chemical and gene editing treatments.

Indeed, these are the principles that form the basis of integrated pest management, where several approaches are incorporated into a holistic, comprehensive and sustainable treatment plan that is environmentally sound and cost effective.

Simply stated, integrated pest management is the most effective tool we have available to protect our health and that of crops and the environment. For the eight years that I served as a state representative on the Committee on Agriculture, Conservation and Forestry, integrated pest management was by statute and I believe still is the policy of the state of Maine. But several towns and cities are attempting to take away a key element of integrated pest management by passing or voting on municipal ordinances that preclude the use of synthetic pesticide applications not just on town owned property, but also on privately owned residential lawns and lawns and gardens.

This is a misguided solution in search of a problem and an infringement on our private property rights. When used following the directions, these applications aren’t harmful. To quote the University of Maine Cooperative Extension, integrated pest management “is a comprehensive, decision-making process for solving pest problems in both agricultural and non-agricultural settings,” and by using it, “informed decisions can be implemented to achieve optimum results in ways that minimize economic, health, and environmental risks.” And the U.S. Department of Agriculture’s latest Pesticide Data Program annual survey corroborates that integrated pest management is working.

We can all relate to wanting our families to live in a non-toxic environment, but banning the use of synthetic pesticides will simply mean residents will lose the ability to choose how to protect their properties.

These problems impact not just vegetation, but humans as well. That’s why integrated pest management is the most effective tool we have to protect our health, crops and environment. Towns and cities should not be precluding its use.

Dean Cray is a Somerset County commissioner and former state representative who served on the Committee on Agriculture, Conservation and Forestry.

Farm to Food Gene Editing: The Future of Agriculture

Curious about what gene editing is? Watch this video to learn how CRISPR is helping farmers grow better crops to feed our growing population.